Used the Deus II for several months now. Initially, I just wanted to not fiddle too much but get out & find. This gives you a baseline to work from by understanding what the machine can do in different circumstances without much complicated alteration. It became quickly apparent that this machine was something very special to me & the way I search. The previous Deus model I bought when they first came out & used it extensively for the last 10 years. On fields its sensitivity & audio particularly made it my primary arable unit. It also worked well for me on some stony beaches in certain conditions with alterations. I have complete faith in the Deus I & the Equinox too, this is a very important factor.

Minelab too have always been in my armoury. From the earliest BBS Sovereign through to the CTX finally replaced by the Equinox on its release. The latter has been my first & only choice on shore work in wet or any situations requiring best depth & its excellent sensitivity too. The 6” coil was paramount in my hunting until replaced by the Coiltek 10x5 for working amongst wet salt iron, unless the Deus I could be operated in more specific dry stony beach conditions, here it absolutely excelled.

I wanted to see how both MF & SF modes worked by comparison of undug field signals. Using the Single Frequency also gave me some experience of how it might be ‘enhanced’ from the DI. I had not used this mode before on the DII. Ran in MF then checked in SF in this session using Sens as a base program.

Firstly, I tried to emulate the settings on both as best I could. Leaving the defaults alone as much as possible allowing for MF differences like Ground Stabilizer etc. No Notch, Disc 6.1, Reac 1.5, Sens 90, Audio Res. 5, & Iron Vol 1, just standard stuff nothing fancy, simply wanted to ascertain any possible differences. The single frequency balanced at 41khz+. Ground read 83 on MF with single on 86. No other settings altered at this stage. There was EMI in MF, so sens reduced to 85 & audio resp. to 4 as time went on.

Five weeks ago I started searching a field of Maize about 8 acres & was originally 6 strip fields in earlier times. Been several times now with more finds appearing. Its been arable for the last 10 years but shifted to minimum tillage in the last four. Finds have dropped off most significantly because of this. Had about 30 hammered from here over time, plus had many other varied finds from here in general.

Noticed some slip pottery & a couple of pipe bowls during the search which were also much scarcer since no ploughing. Turned out it had been sub-soiled & ploughed this time around, which is a big bonus.

Searched for five hours hours recovering 31 non-ferrous targets (I purposely excluded modern aluminium can pieces, 6 of these). They consisted of 15 Lead, 8 Brass and 5 Copper pieces plus 3 Hammered. I was very surprised to find the latter, not found three hammered in one trip for some time. An Elizabeth 6d, Voided Penny & Elizabeth 2d. They were easy targets so nothing else to say much except I'm chuffed!

I had a number of iron targets in MF, which on switching to SF noted some audio differences making it a lot easier to identify in Multi (had already come to this conclusion over the last months) Each & every target was swept at 360 degrees allowing for directional problems if any. 1 bigger target I just couldn’t ID correctly in either mode was a round 4” cast iron section with a hole in the center & very thick to boot, could have been big non-ferrous easily. Cast & wrought iron is more lively due to its resistance to corrosion & often found in fields. A few unknown irons dug is better than leaving a desirable find. On the subject of Coke in arable, like the Deus I if the signal was wide medium response and shallow, plus low 20’s numbers that do typify coke. If there’s any doubt dig it though, I dug 12 pieces to give me confirmation & I was happy with my analysis. Coke doesn’t respond past a relatively shallow depth plus its signal width gives it away. The signal would be too wide for a broken ring fragment for example which also hovers in the 20’s (or less) or other low conductive marginal targets. There’s absolutely no substitute for audio experience on the Deus, this is paramount.

Where there any targets than the other couldn’t find? Absolutely none at all, which is actually reassuring at the moment. However, there is a very small piece of elongated lead ( lower left bottom in photo) which the sound was considerably better in MF. My guess is that it was close to vertical by the response, in any case I would have dug it in SF anyway - & that’s the point at this current comparison.

In summary, I found MF easier to identify targets I didn’t want than single. Looks like EMI might be prevalent in some areas more so than the Equinox. Switching to single Freq. is a good alternative here. Perhaps XP have ‘pushed’ the detector possibly? In any case don’t ever worry about dropping settings to stabilize it. Its sensitivity is very high to marginal targets which is so very important to me in arable land & elsewhere of course. I’m sure there will be some software mods to iron out a few niggles & improve other areas too, lets see! I'm sure I'll change my own thoughts along the way as well.

There are positive differences to the single mode from the original Deus, but preferences on the Deus II would be Multi wherever possible as its advantages in coping with soils & metal variations & its audio responses are superior. modern detectors are really good switch on & go especially the Deus, so just go out & dig, don't think about too much!! 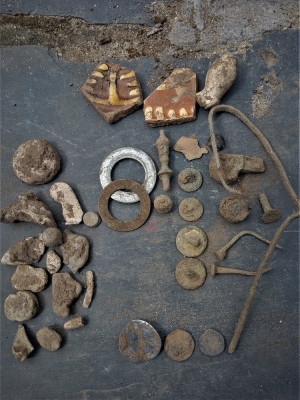 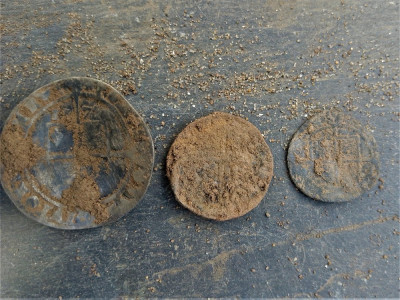 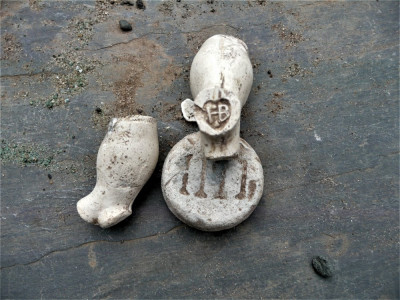 Thanks for your informative post and glad to hear your positive feedback.
Top

Agree with all your findings too. I am finding iron easier to spot on MF now than single frequency. I dug two iron buckles today but both were very suspect and I knew were likely to be iron but liked to check. Unlike you though I was only finding bronze and lead blobs and a single button rather than hammered coins.

Much appreciated reports like these, ive got the cash waiting for the Deus II but havent got round to letting it out of my wallet yet

Good report Stu and well done on the trio.

With the Nox I find that MF is king, though SF is still very good and especially handy when there is strong EMI about. I expect it will be a very similar situation with the D2.
Good things come to those who wait.
Top

Great report and congratulations on the hammies. The D2 in multifrequency loves silver.

Were you getting any serious depth or was it still a bit dry?
Top
Post Reply
8 posts • Page 1 of 1