I have a list of potential bottle tips which all take time to search out and do some local detective work on and those that show some promise take priority . This Easter weekend was an ideal time to have a few days off , do some gardening and earn me a few brownie points and give me a few hours to freely roam and get to checking and ticking off my list .
The one I had in mind has been fermenting in the background for well over a year and i wanted to lay it to rest so off I set for a few hours on my chosen route and with all these things you have to have an open mind .
On my first visit I never go armed with any tools , it is purely a case of sniffing out the lay of the land , after all it could be one of those where it requires a door knock etc .
This one was an easy one , no hassle , just off the road and some open woodland and going by my map reading and the aid of the internet I knew I had the right spot .
One very large pit which showed up on a turn of the century map and it wasnt hard to find , it was deep !! 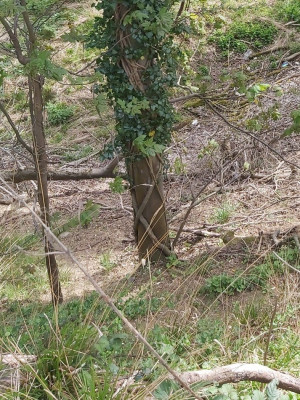 Somewhere around the perimeter of this cavernous and very dangerous looking pit should have some signs of tipping and it wasnt too long before I found what I was looking for and thankfully this was at the mouth of the pit which was very shallow . 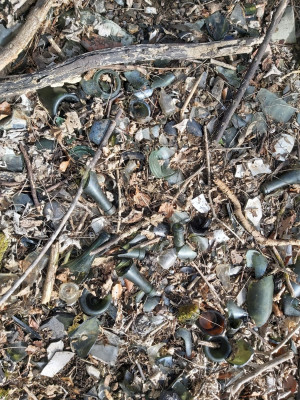 Here the ground was littered in broken glass but not quite the age I was looking for , it was 1930s plus but fortunately there were signs of earlier stuff . At the bottom of the shallow gradient of the pit was even more evidence of tipping , mixed in with the usual trash . 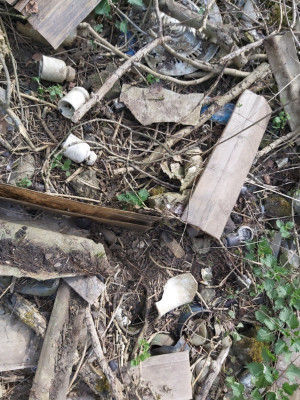 Plenty of ceramic insulators , not my thing but people do collect these and in amongst this lot was some more earlier fragments which again showed promise . 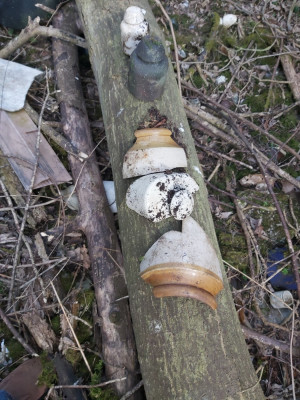 All these little clues give way to an age of constant tipping , the question was for how long and exactly how old . I scanned the edges of the pit , most were almost sheer but looking for more clues I could see a gradual slope slightly darker soil and then the clue I needed in the shape of a bottle poking out . A sturdy stick and I was able to prize the bottle from the compact soil which them revealed dark ash and i knew then that this was the tipping point and over the years with constant use it had built up creating this gradual slope . A bit more stick probing and I was beginning unearth yet more bottles . 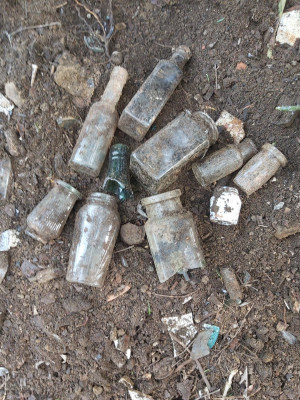 Poking around is always a nice way to spend a sunny day.

The pictures remind me of the tip I dug the other year, similar bottles too. It will be interesting to see what is deeper and I hope there are some much older goodies there for you.

That looks very promising! Look forward to seeing the results of your test pits. I suspect it’ll be very interesting