We've had some heavy rain so I thought I'd take a last look on a section of field I've walked a lot. It will be ploughed soon

I know this is a metal detecting forum but lithics, like metal finds, are not done until the field is done.

Nothing much turned up except this good sized, probably early BA scraper. I'm just posting it to show that lithics aren't always pretty or intricately formed. It's just a tool to do a job. It's made from a single large flake, about 2cm thick at the platform and still has lots of cortex on the outside (the brown skin). The edge is then unifacially (from one side) retouched to form the scraper. So, if you see a large shell shaped flake it just might be worth turning it over. 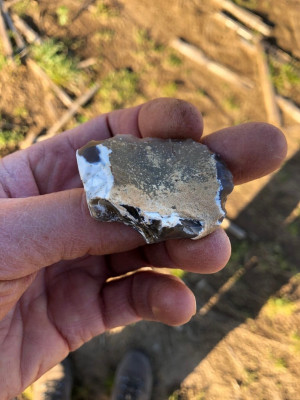 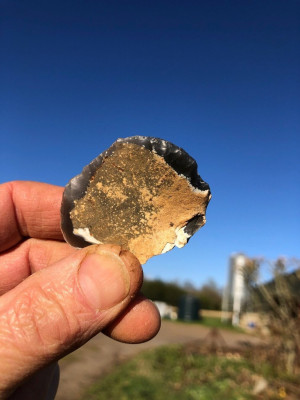 That certainly isn't the roughest one that I've ever seen.

(I have sorted your pics so they show correctly now when clicked....its not you its our software that turns them if they are over a certain size to save stretching the forums theme software
I am on the case trying to get it so it doesnt happen)
I am not known for my ID skills, but i make a cracking brew

Thanks. What’s the maximum size to avoid you doing extra work?
Top

I looked at that first photo and thought Figgis had been sneakily topping up your tea with strong gin and affecting your eyesight. Then I saw the second photo and realised Figgis wouldn’t have shared his gin anyway

. I have one field that has a layer of flints on it in one small section with none anywhere else. I can’t decide if they had been used as building material or for some other purpose but am sure they are not a natural tenant of the land. None have been worked though although I always check.

Difficult to say but a couple of things to consider.

Flints taken out of the land for building tend to be of the bigger variety as they have to be faced before they can be built into a wall.
Some flints get onto the land through liming the soil to change pH. This can be done with chalk which often contains flints. It happens quite a lot around here on the sandy soils which tend to be very acid.
Flints also get added as part of a building site. We have some heathland nearby with large areas absolutely covered in flints of all sizes. It was brought in during WWII to form the base of huts for Canadian troops.

Always worth asking the owner or locals.

And did you say there's some gin on offer