Yesterday morning saw me knee deep in a small pit searching for bottles but sadly the vast majority were either burnt or broken . Lucky its a shallow tip but one of those that can prove to be a heartbreaker if you hit the wrong spot and yesterday was no exception . The good thing was the weather , no rain , just clear blue skies and although a little chilly , with some tedious digging it wasnt too long before I was warmed up .
I wish I had taken some photos of the melted bottes , it is incredible how heat at a certain temperature will warp glass with various bottles curved over and contorted into some truly bizarre shapes .
Crockery suffers badly and I have unearthed some spectacular shards from plates and bowls , some dating back to Georgian era which were most likely heirlooms that finally were discarded due to damage or just out of fashion . In amongst the piles of shards you can get lucky and one small shovel full produced this neat tiny little blue poison bottle that somehow had survived the ravages of heat and now freed from its entombed prison of soil and ash . 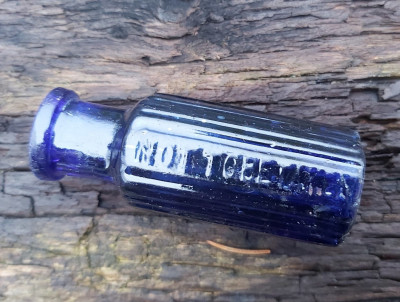 Other than that little blue survivor , the other retrieved blue poisons were either warped beyond recognition or broken and there seem to be an abundance of them which is a shame but part of the game .
The fish was most likely a flower vase with the upper most neck missing . I took this for a friend of mine who will cut this down and use it for whatever purpose they intend . The other saving grace for me is the ginger beer and although common to find this version , it is in minty condition circa 1906 and was yet again another lone survivor from at least another five ginger beer bottles which were all sadly damaged beyond repair .
Win some lose some but not too bad for a few hours tucked away far from the madding crowds 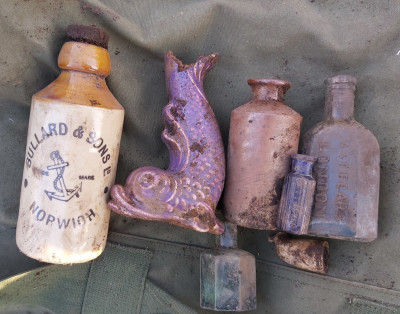 That’s nice, always had a soft spot for those blue poison bottles. Funnily enough was round my parents place yesterday and young un was looking at bottles I collected or dug decades ago and was interested in going digging for some. I wouldn’t have a clue where to go locally nowadays though, the places I went are mostly under housing estates now!
Top

Those blue bottles are also my fave to see

It was mother in laws i think, which we inherited...i think it lives in a box in the attic now though

Ours is probably 40 to 50 years old at a guess
I am not known for my ID skills, but i make a cracking brew

mattjb wrote: ↑Mon Jan 10, 2022 6:24 pm That’s nice, always had a soft spot for those blue poison bottles. Funnily enough was round my parents place yesterday and young un was looking at bottles I collected or dug decades ago and was interested in going digging for some. I wouldn’t have a clue where to go locally nowadays though, the places I went are mostly under housing estates now!

A sad truism , many old tips are now built on and its getting harder to find fresh undug tips .

River walks can produce bottles , had some luck especially those close to towns .

What a shame about the flower vase, have seen those in Green.
Always good to see what you have dug, Paul.
Cheers,

Nice blue glass but I have a soft spot for the fish type vases. I love the finish on them and have a couple myself, although I didn’t dig them up

I prefer the green ones but they are all lovely.

Thanks fir a great write up Paul