Agreed! BTW Cath/Bruce/ Figgy ...what about a 'post of the week'?
"The forest was shrinking, but the trees kept voting for the axe, for the axe was clever and convinced the trees that because his handle was made of wood he was one of them."
Top

Finally, home, de-escalated and no big bangs, waited for ages for the police to arrive, then had to wait for the EOD, police said there was only him and one other covering a huge area, and dealing with more urgent incidents, almost tempted to start playing a violin or our-tunes the way it was relayed to me

I did explain they would need a 4X4, police arrived in an estate car with no ground clearance, EOD had a lorry with little ground clearance when they went flying past, stopped 30 metres past where we flagged them down, said they had trouble getting reverse, so had to travel a mile to go and find somewhere to turn round.

So, after explaining and reviewing the picture I sent them they all jumped aboard my car and set off, get on site and said have you got a spade……………….ahhhhh…..yes, so went to one spot and handed him the spade, he digs it out completely and had a good look, proceeded to bang the end and said, yep, a smoke mortar due to the three protrusions on the business end, it had done what it was intended and was dead
The other four were just the same, he went on to explain that even if live the damp would have made it almost inert and would not have gone off, the fin found on its own he said may have been a live exploding mortar as that’s all there was of it looking at how the fin was damaged.

He explained how the mortars fired, looking at the site and the line he thought they were all fired from the same position, they were all British and likely used to practice as it was an ideal area. He went on to say there are possibly lots more due to the high number of bullets also found, showed me some pictures of different mortars and what to look out for but don’t move anything, call us we will deal with it even if they are like these found, and were no danger. Showed me the aftermath of a detonated mortar that hey had blew up and the crater was quite large

He said they get called quite a lot to stuff found metal detecting, on a couple of occasions he asked where they were, to be told they are in the hedge and said that’s not what should be done with them, leave them where found

That’s all I have found in this field apart from a Victoria penny 1892, so I don’t think I will be doing any more in this field, had enough excitement and dug bullets and sheep poo from this field.

Here is a picture of one he dug out; the fin would have screwed on the left-hand side of the mortar on the bit protruding 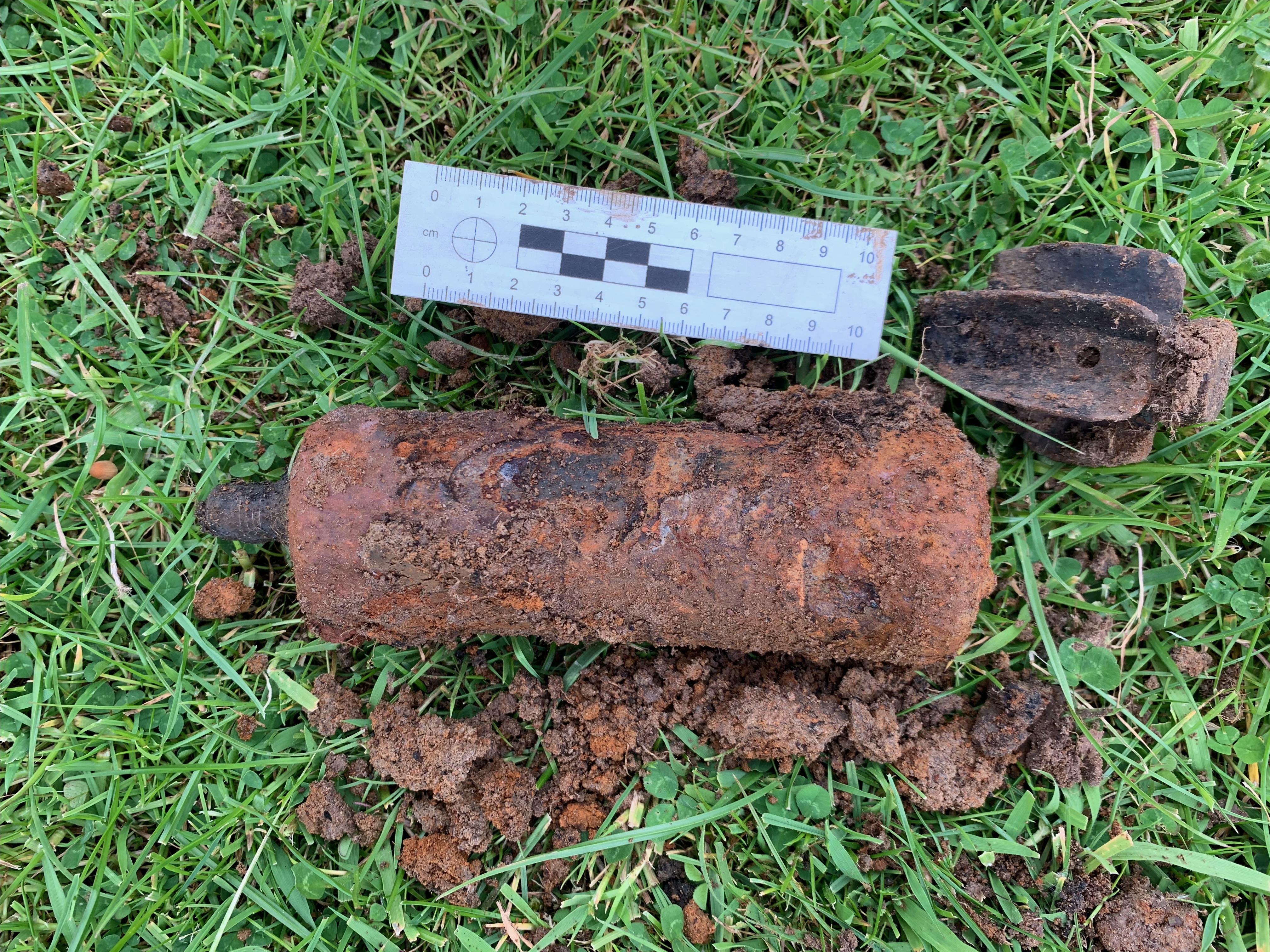 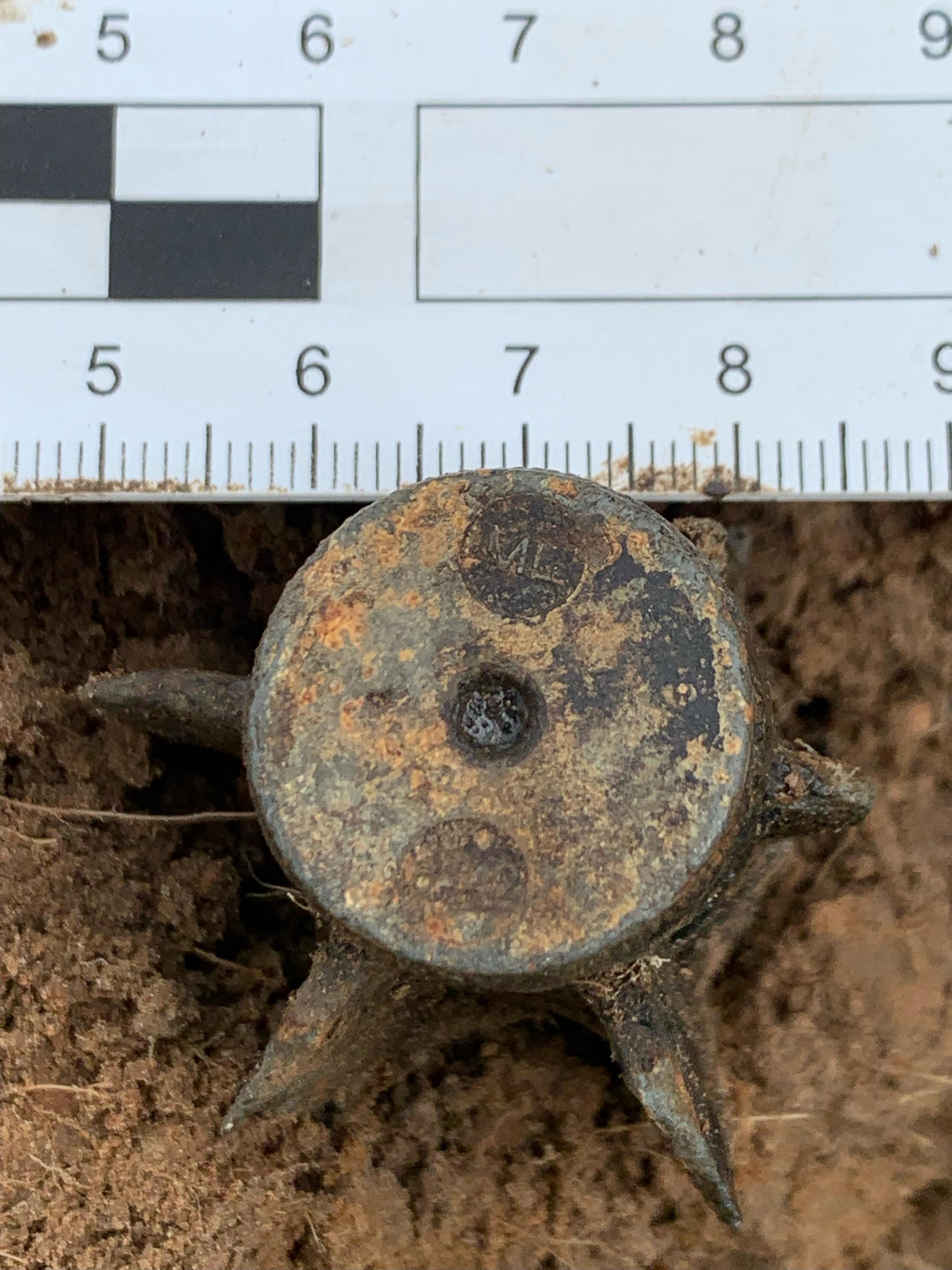 And one in the ground 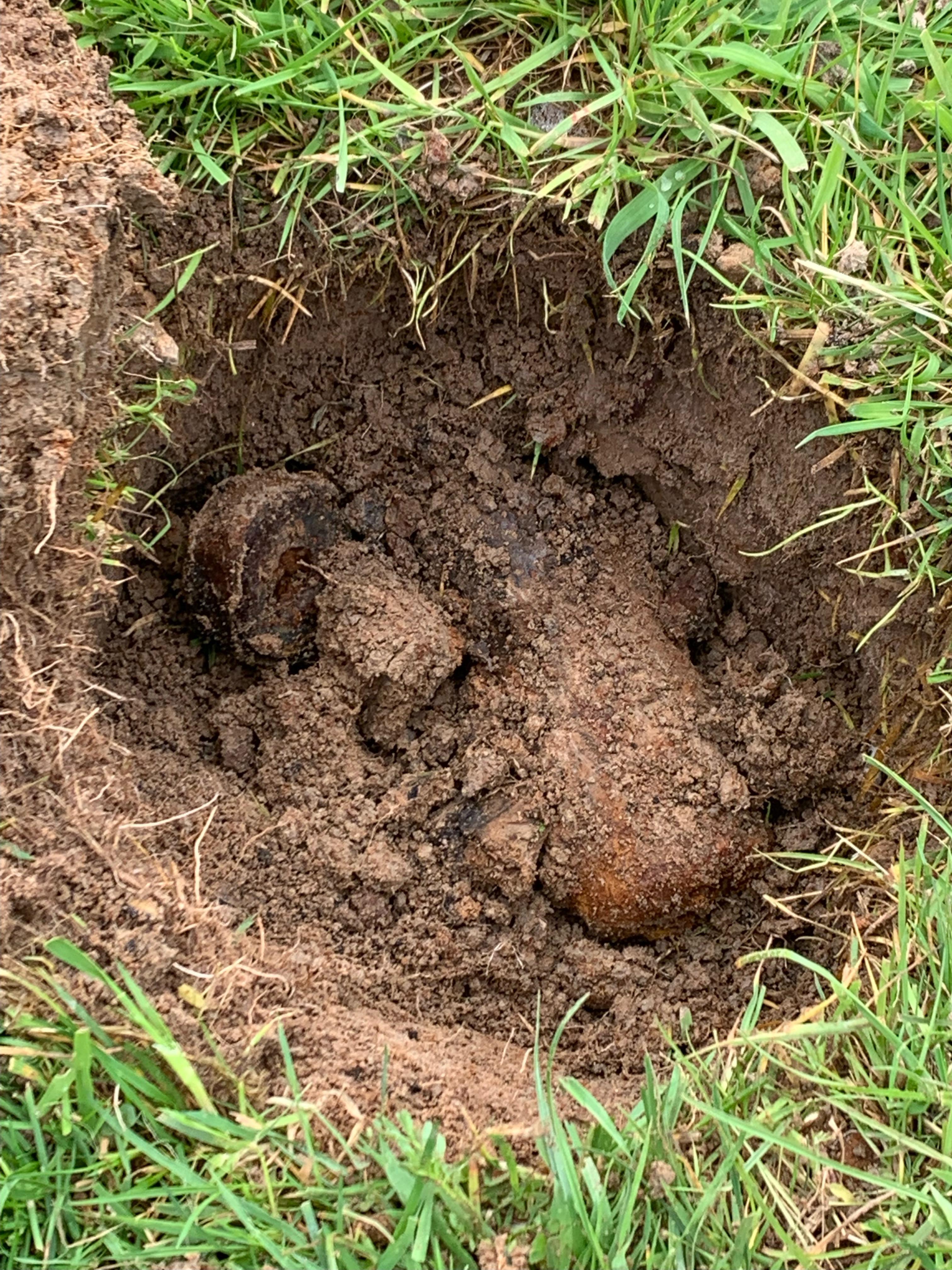 Regards Steve
A foolish faith in authority, is the worst enemy of truth." Albert Einstein
Top

Well done Steve. It’s a chore but could be a very different news story if found by someone without some knowledge and a sense of responsibility.
You did everything right and deserve a beer.

Not sure whether that was a good out come or a bad? Lots more when the EOD make things go bang!

How big an area were these rounds found in?

I was in the TA for many years and had a lot of fun with things like this..I seem to recall the guys on the big 81mm mortar had to deal with unexploded mortar rounds themselves on the basis who ever fired it had to go forward, try to locate it and then place a small charge on it and blow it from a distance...Just walking onto a mortar impact area would be nerve wracking enough, but trying to locate and then blow a live shell must have been terrifying....From what a gather standard practice seemed to be not to be able to locate it!

Got to play with the 51mm mortar (the replacement for the 2") several times mostly with smoke or illuminated shells, but also a HE as well...All good fun!
Top

A good outcome, nothing live found, also dealt with as per guidance on finding ordinance, no one hurt, no one suffered a loss, all removed, chucked into a metal box on the back of the EOD truck to be taken back to Larkhill, and possibly sent to Shoeburyness to be destructed.

Bit of a faff but had to be done properly, the biggest danger I faced was coming home late for dinner

Shame they didn’t have to detonate any on site, five bangs would have been something to see and record, but no damage done to the land, no big holes to fill in so win win I guess

I was surprised at how relaxed and not bothered or concerned the guys were, just another day in the office I guess, they did deal with some ordnance found at Salisbury airfield this morning that they removed.

Had a good look at the remote bomb disposal robot in the truck, that is a neat bit of kit, a life saver when dealing with a known threat and too dangerous to use human intervention.

All of the mortars found were in a pretty much straight line, dependant on the angle of the mortar any where from 200 metres to the last one I guess, the area is in a deep valley with some woodland either side, high land at the top end and spring fed stream running in the middle, so a good practice area apparently, the EOD guy said if you look at some pictures of real combat if the mortar is almost vertical its close quarters combat the enemy is close and almost on top of you.